A nice spot to stop by after your visit to the Shurijō Castle Park is the Shuri Kannon-dō (首里観音堂). The temple that is just a 10-minute walk from Tamaudun (玉陵) is one of the six temples around the castle that survived the turbulence in the last 400 years. In addition, the temple that the Ryūkyū imperial family erected has a few living “miracles” that make you want to believe Buddha does exist!

In 1617, the Satsuma Province requested a Ryūkyū kingdom’s prince as a hostage. When the chosen prince, Shōhō (尚豊), departed for Satsuma, the king prayed to the Kannon Bodhisattva that he would build a Kannon-dō if his son was able to return safely. Probably because of his prayer, instead of the initial ten-year-plan, Shōhō, who later became the king, came back to Ryūkyū in the same year that he was taken away. So in 1618, Shuri Kannon-dō, formally known as Jigen-in (慈眼院), was erected. From 1645, the Ryūkyū king performed rituals each year to pray for the country’s peace and prosperity.

Unfortunately, the Japanese army’s headquarters was underneath the Shurijō Castle Park during World War Two. So the area where Shuri Kannon-dō was targeted by the US military and bombed. The temple was only restored in 1980 and is now a place to pray for safe travel.

In Shuri, there is an old custom called “Shuri 12 Zodiac Meguri” to visit the Buddha who controls your zodiac. People believe that each zodiac has a corresponding Buddha in the area. According to your birth year, your guardian Buddha might differ.

The eight Buddha statues related to the 12 Zodiac Meguri are divided and placed in four temples in the Shuri area. And Shuri Kannon-dō is one of them, housing the Buddha who looks after the zodiac of Rat, Ox, Tiger, Dragon, Snake, and Horse.

The Buddha Statue and the Tree that Survived World War Two

Although Shuri Kannon-dō was severely bombed, a Gautama Buddha statue from more than 400 years ago was saved from attack. The chief monk at the time saved the statue by putting it in an air raid shelter. The hidden image is thus known as the hidden Buddha that escaped the ravages of war (戦禍を逃れた秘仏).

In front of the main hall, another thing was fortunate enough to survive the war. The banyan tree, which is more than 120 years old, lived through the war and is now called the “Elder Tree (長老樹)” and is treated as an object of worship.

Konan-kun, The Dog Who Prays to the Buddha

Another miracle type of fact of Shuri Kannon-dō is the temple’s pet dog, Konan-kun (コナンくん). He is a famous dog on the news in the early 2000s because he joined his hand in front of the Buddha. And it wasn’t just a coincidence. He does it again and again and again.

According to the monk who takes care of him, the monk taught Konan-kun to join his paws before eating, as many Japanese do to show their appreciation of food. Konan-kun mastered the gesture in less than two days and soon started joining his paws in front of the Buddha statue too!

While Konan-kun is an old dog who couldn’t quite manage to join his paw now and stays at home most of the time, if you are lucky, you might bump into him when you visit the temple!

Lastly, Shuri Kannon-dō’s observation deck allows you to overlook Naha‘s cityscape with the ocean afar as a backdrop!

And, remember to check out Shuri Kannon-dō’s bell because it is the heaviest in Okinawa, at a weight of around 2,000 kg! 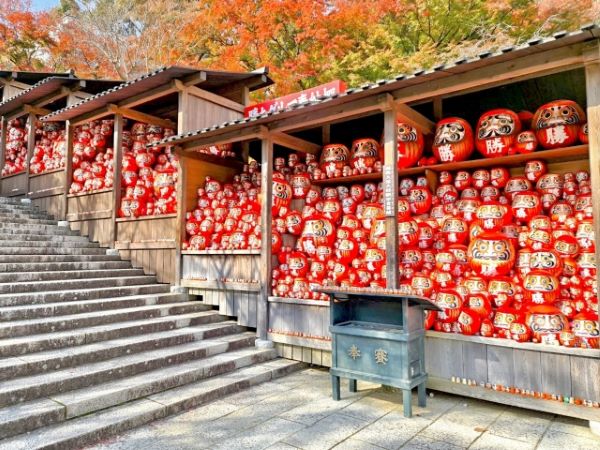