You probably have heard about the cat islands in Japan, and maybe you have even been to one, but did you know that Japan has a rabbit island too? Ōkunoshima (大久野島) is a small island floating on the Seto Inland Sea. The island in Hiroshima Prefecture has more than 1,000 wild rabbits (as of 2019), which is a paradise for those who love to see the fur babies munching on the vegetables or fruit in your hand!

About the Rabbit Island, Ōkunoshima

Ōkunoshima is a small island with a circumference of 4.3 km that floats off the coast of Takehara City (竹原市) in Hiroshima Prefecture. Because of its huge rabbit population, people call it rabbit island.

Feeding the rabbits on the island is a must for anyone who adores these fur babies. But on top of that, the island also has many more charms awaiting for you to discover!

How to Get to the Rabbit Island, Ōkunoshima?

To get to Ōkunoshima by public transportation, it is easier to board a ferry from the Tadanoumi Port (忠海港) in Takehara City. Ferries also depart from Ehime Prefecture’s Sakari Port (盛港), but it is harder to get to the port by bus or train. However, if you are willing to self-drive, the car park at Sakari Port is likely to have more vacancies as there should be fewer people boarding the ferry from there.

Please refer to the official website HERE for the ferry’s timetable (scroll down to plan your trip session). Note the 9th service from Sakari Port will not stop at Ōkunoshima (大久野) from November to January (the one marked with a ※ sign).

A one-way trip takes around 15 minutes.

The cost of the ferry ticket is as below:

Note that you won’t be able to drive around Ōkunoshima. So if you drive over to Tadanoumi Port, leave your car in the parking lot.

How to Get to Tadanoumi Port

From Tadano-Umi Station to Tadano-Umi Port, it is around a 3-minute walk.

When you get to Tadanoumi Port, head to this trendy black-colored building first. This is where the ferry ticket counter is located. The souvenirs of Ōkunoshima are also sold there.

Important: Leave yourself ample time at Tadanoumi Port to purchase a ticket. Especially on weekends and public holidays, when it is likely to be packed with tourists.

Tips:
☛ Check in your luggage at the ticket counter to lighten yourself up during your time at Ōkunoshima. One piece of baggage will cost 500 yen.
☛ Free shuttle buses are running between Ōkunoshima Second Pier (where you will arrive at Ōkunoshima) and Kyūkamura Hotel, which is close to Ōkunoshima Visitor Center.

Why Are There Rabbits on Ōkunoshima?

The reason why rabbits reside on Ōkunoshima is not clear yet. However, one of the theories is that it all started when eight rabbits were left on the island by members of a local elementary school in 1971. Because there weren’t many predators on Ōkunoshima for rabbits, the population increased rapidly, especially with the vegetables and treats brought by tourists.

The rabbits on Ōkunoshima are all European rabbits, the same species as Peter Rabbit!

Tip: Instead of stroking the rabbit’s back, most rabbits would prefer that you stroke their chins.

Tips:
☛ Remember to source some vegetables and/or fruits before you board the ferry for the rabbits. You can also purchase some rabbit feed from Tadanoumi Port (but they love fresh vegetables such as carrots/fruit more).
☛ If you have purchased the rabbit feed from Tadanoumi Port’s ticket counter, bring the feed bag back in exchange for a rabbit postcard!

What to Wear and Bring to Ōkunoshima

The Best Seasons to Visit Ōkunoshima

While Ōkunoshima isn’t all that big, cycling around the island is probably the best way to enjoy your time on Ōkunoshima. Not only will you be able to cut down the time spent on getting from A to B, but the sea breeze is what you would want on a hot summer day!

The Island Where Poisonous Gas Was Produced During World War Two

While Ōkunoshima is considered a peaceful place to be now, the remains of the poisonous gas plant tell a different story.

From 1929 to the end of World War II, Ōkunoshima, now a utopia for rabbits, was where the Japanese army manufactured poisonous gas.

To hide the fact that the nation was making poisonous gas from its citizens, Ōkunoshima’s residents were forced to leave their homes, and the island was then erased from the map. In fact, even the workers weren’t aware that they were making poisonous gas this whole time! It was kept as the top-secret within the army.

The poisonous gas made on Ōkunoshima was really powerful. Not only did it destroy the enemies in the war, but the process of making the gas also resulted in permanent damage to the workers.

If you are interested in learning more about this dark history of Japan, stop by Okunoshima Island Poison Gas Museum (大久野島 毒ガス資料館). Work clothes from that time are exhibited. Explanations about the poisonous gas damage are also on the display panels.

From the 1960s, Ōkunoshima finally became habitable again and safe enough for the breeding of these adorable rabbits!

Ōkunoshima also has a power plant, as it used to be an essential infrastructure to run the poisonous gas factory. The building was also used as explosive storage when Japan was at war with Korea.

When you get to the ruins, there may be a few rabbits around, forming a rather weird contrast between the sad history to the island’s carefree animals.

During the Meiji period (1868 – 1912), Ōkunoshima was a fort to guard the Seto Inland Sea. So batteries were constructed at the island’s north, central, and south end in 1897.

Although the batteries were ultimately abandoned in the Taishō period (1912 – 1926), the remnants became the storage of the poisonous gas produced.

On the south of Ōkunoshima Island, close to the first pier, there are four sound collectors formed in the shape of rabbit ears. The idea is that when you stick your head into one of them, you will hear the same sound as the rabbits on the island.

The direction of these collectors can be changed too! So if you come with your children, it will be quite fun to try them out as a family!

The promenades on Ōkunoshima are well-maintained. For those who love trekking, the experience of strolling around the island with rabbits popping out here and there is just exceptional!

You can also hike up to the observatory deck in 20 minutes. Although the slope is a bit steep, the tiredness of the hike will soon disappear once you indulge yourself in the spectacular scenery of the Seto Inland Sea!

Tip: We recommend hiking from the trailhead between the Ōkunoshima Camping Ground and Ōkunoshima Visitor Center.

If you want to spend more time on the peaceful island, camping at Ōkunoshima can be a great idea!

The camping ground is the property of Hotel Kyūkamura Ōkunoshima. So everything you will need for your camping adventures can be covered by them. They can even set up the tent for you! Furthermore, if you select a plan that includes dinner and breakfast, you don’t even need to cook!

Another reason you might want to stay overnight on Ōkunoshima is because of the active hours of rabbits. They are basically nocturnal and are most active in the early mornings and at night. So if you prefer to see them hopping around instead of lying on the ground, consider booking your stay with Kyūkamura Ōkunoshima.

For more information and booking, please refer to the official website HERE.

Tip: Let the hotel know your dietary requirements in advance.

If you are interested in visiting an island filled with rabbits, you will probably want to visit an island with more feline residents than humans too!

Refer to our article on the Top 10 Cat Islands in Japan for more information (=ﾟωﾟ)ﾉ.

Have you heard of the Seto Ōhashi Bridge (瀬戸大橋)? It is currently the world’s longest 2-tiered bridge system! With a total length of 13.1 km,… 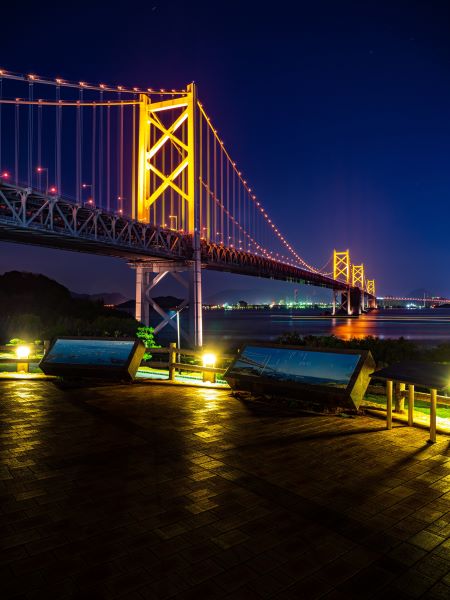 Kojima District (児島郡) in Kurashiki City in Okayama Prefecture is Japan’s denim mecca. As soon as you step out of the JR train, you will…