Cat cafe or Neko Cafe in Japanese, has become a common attraction found in the big cities of Japan. If you have been to one of them and have enjoyed the companionship and comfort offered by the adorable indoor cats, you might be interested in Ao Island (Aoshima, 青島) in Ehime Prefecture, where the majority of its residents are felines.

Traveling to Ao Island isn’t very straightforward, so below, we will attempt to run through how you can get there and things to watch out for when you plan your trip.

How to Get to Ao Island

Ao Island is located around 13 km off the coast of Ōzu City (大洲市) in Ehime Prefecture. If you are coming from other parts of Japan, take a bullet train to JR Matsuyama Station (松山駅) and change for the Yosan Line (予讃線) to get to JR Iyo-Nagahama Station (伊予長浜駅).

Because the Yosan Line runs along the coast of the Seto Inland Sea (瀬戸内海) and the Uwa Sea (宇和海), it will be around a 60-minute train ride filled with magnificent ocean views!

Important: The number of services running on the Yosan Line is limited. Please refer to the timetable HERE for the services that are marked with “愛ある伊予灘線経由” to plan if you are changing trains at JR Matsuyama Station.

From Iyo-Nagahama Station, head to the Nagahama Ferry Terminal (長浜港).

Tip: If you are driving, there is a free car park close to the Nagahama Port for the use of Aoshima Ferry’s exclusive customers.

The ferry’s name is called Aoshima (あおしま), the same as how the Japanese call the island.

As there are only around five people (as of 2021) living on the island, and because the island isn’t developed as a tourist attraction, there are only two services for departing and returning from Ao Island.

The cost for Ferry Aoshima

Important:
☛ There are no coin lockers on Ao Island. Boarding the ferry with luggage will incur extra charges.
☛ They only accept cash payments.
☛ Services might be canceled due to bad weather. From late autumn to winter, waves are usually rough. So remember to check the weather report before you head out.
☛ The ferries are the only means of transportation for the residents on Ao Island and are used to transport daily necessities. Thus, they will get priority to board the ferry.

Which Service Should You Take?

Reading Aoishima’s timetable above, you might have realized that it isn’t particularly tourist-friendly.

If you choose to take the first service, you will end up on the small island for more than 7 hours. So you might think it is best to take the second service.

Therefore, if you choose to risk it, make sure you have a backup plan for the day, especially if you plan to go to Ao Island on weekends and public holidays.

Tip: You can try to give the ferry company a call at +81-893-52-2700 to grasp an idea of whether the second service will be operating on the day. If you don’t speak Japanese, you can kindly ask your accommodation staff to check for you.

Ao Island, which has a size of around 0.5 square kilometers, use to be uninhabited. In 1639, a guy called Yoshichirō (与七郎) and his family from Akō City (赤穂市) in the Hyogō Prefecture decided to relocate to Ao Island.

The residents of Ao Island rely on fishing for a living. At its peak, the island had more than 800 people. But in 2021, the population decreased to just five people, and most of them are elderly. With a sharp decrease in population, many of the houses on Ao Island have been abandoned.

What is also living on Ao Island is more than 100 cats! When you get to the island, you will realize that cats can be found anywhere and everywhere. So be careful not to step on them accidentally!

The Facilities and Infrastructure on Ao Island

There are no motor vehicles on Ao Island. So you can walk freely in the middle of the road without needing to worry you will be run over.

However, Ao Island also has no restaurants, accommodation facilities, convenience stores, or vending machines. Thus, if you are taking the first ferry service to Ao Island, remember to bring a lunchbox and enough water.

How about toilet facilities? The answer is yes. The waiting room found close to the deck is where the toilets are located and cleanly maintained.

And as you might have figured out, there aren’t any attractions on Ao Island other than cats. But you might want to visit the shrine on the island if you take the first ferry service.

About the Cats on Ao Island

The cats on Ao Island are very used to humans. They will most likely start heading to the deck when they see the ferry approaching. So when you get off the ferry, you probably can hear their meowing!

Some of them also desire human company that they might jump onto your lap when you sit on a bench. Just like the cats in a cat cafe, if you have some cat toys, they will get excited as soon as you show the toys to them.

Things to Bring for Your Trip to Ao Island

Things to Keep in Mind on Ao Island

To minimize the impact that we tourists bring to the residents, please follow the below rules during your time on Ao Island.

While on Ōzu City’s website, it asks visitors not to feed the cats on Ao Island, there is a designated area for cat feeding on the island. So feeding the cats or not, you probably need to read between the lines. To get to the cat feeding area, follow the directory sign that says “ネコ餌場→” after you get off the ferry. But remember, don’t over-feed them.

Tip: If you don’t want your lunch to be accidentally snapped by cats, hide in the waiting room. If the cats notice your intention, they will wait just outside the waiting room’s door. Open the door slightly, and you might find a few of them staring at you (´▽｀*).

With the human population on the island continuously decreasing, Ao Island is most likely to become an uninhabited island soon. Worrying about the cats’ future on the island, the residents have sought help from animal charities to perform contraception operations on all cats on Ao Island.

Although initially there were residents who opposed the operation, the charities’ staff managed to convince all Ao Island’s residents that contraception operation is necessary and for the cats’ good. This is the only way to prevent the cats from over-breeding.

In 2017, when more than 200 cats were on Ao Island, cats’ caretakers were hugely burdened. Moreover, it has resulted in kittens being killed by male cats so they could mate with the female cats that were otherwise busy taking care of their babies.

While it is sad that no cute kittens will be born on Ao Island going forward, it is far better than leaving them to die on the island when all residents are gone or have to perform euthanasia.

If the weather is good, you might want to end your day with the sunset at Shimonada Station. It is said that it is the station in Japan that is closest to the coast.

With the Aoshima arriving at Nagahama Port at 4:50 pm, you should have ample time to get to JR Shimonada Station before sunset in warmer months.

The station is just a few stations away from JR Iyo-Nagahama Station (伊予長浜駅). Whether you drive or take a train, it will take around 15 minutes.

Just a few-minute walk from JR Shimonada Station, you will notice a rail track continues into the sea.

You are welcome to take photos of the fantastic scene from the bridge or from the roadside, but just be aware the track is on the ground of private property. So please don’t trespass.

Ao Island isn’t the only island in Japan known as cat island. Such kind of islands is actually scattered across the country. 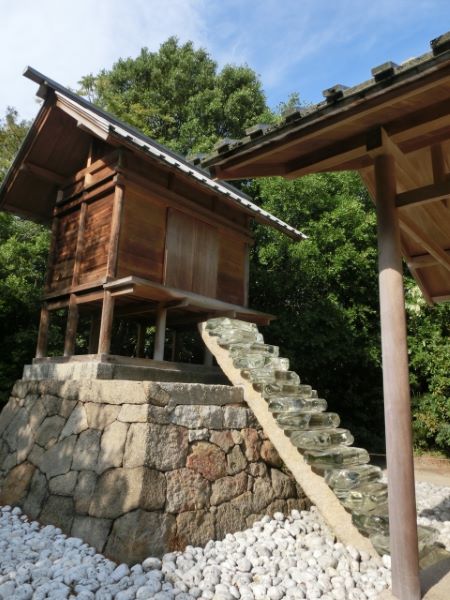 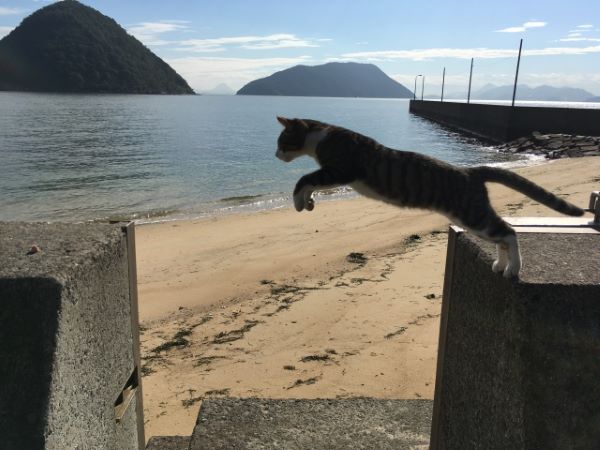 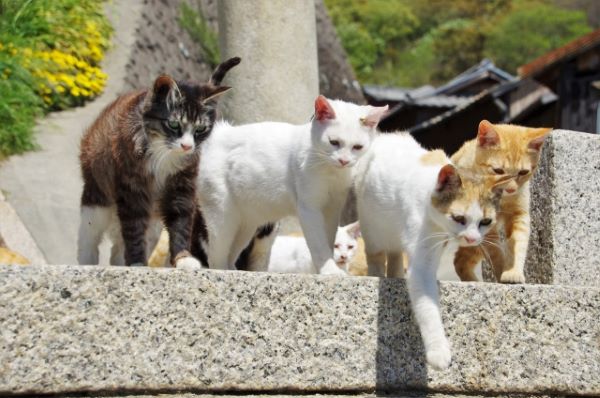 Speaking of the Seto Inland Sea, what will pop into most people’s minds is probably the Setouchi Triennale (瀬戸内国際芸術祭). In addition to the event’s main…